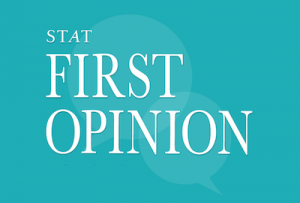 Should publications that post op-ed pieces tell us more about who wrote the op-ed and what their potential biases and conflicts of interest might be?

I’m in the camp that answers a resounding YES.

Till Bruckner is, too. He writes for Transparify, an organization that rates “the financial transparency of major think tanks.” He is also the founder of TranspariMED, which “works to end evidence distortion in medicine.”  His watchdog work on op-eds inspired a New York Times public editor column a few years ago, “Hidden Interests, Closer to Home.”

This week he tweeted criticism of STAT News for not disclosing more about the author of an op-ed criticizing possible Biden administration plans to evaluate drug therapies. The op-ed delivers a fearful prediction:

Patient advocates should scrutinize any “independent review board” the Biden administration commissions because it will have a conflict of interest and a bias against breakthrough therapies. In this scenario, patients may never receive a new, potentially life-changing therapy because it is rated by a biased review board as not having any “quantifiable benefit” based on its price tag alone rather than the potentially life-changing impact that it could have for patients.

That’s a sweeping and fear-mongering allegation – that any review board the new Administration will appoint will have a bias and conflict of interest.

What bias or conflict of interest does the op-ed author have?

STAT didn’t provide that background.  Readers are only told that the author is a visiting fellow at the Boston-based Pioneer Institute. (Addendum at 7:30 a.m. Feb. 12:  Readers were not told that the author, William S. Smith, according to the Institute’s website, “spent ten years at Pfizer Inc as Vice President of Public Affairs and Policy where he was responsible for Pfizer’s corporate strategies for the U.S. policy environment.”)

What is the Pioneer Institute? Its website tells you that it is a public policy research think tank whose mission statement endorses free enterprise and free markets.  Who funds them?

Till Bruckner tweeted this graphic, and wrote that “it would have been good (for STAT) to disclose that one of the think tank’s top funders is Pfizer, especially as their op-ed mirrors industry talking points 100%.” 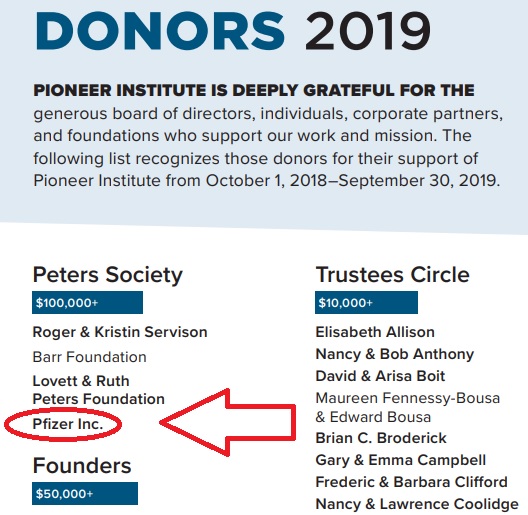 HealthNewsReview.org has criticized STAT’s op-ed policies several times over the past 3.5 years.

In response to some of this criticism, STAT revised its guidelines for op-ed submissions. But the latest example begs the question of whether that went far enough.

To be clear, STAT delivers some terrific journalism. But in the interest of continuous quality improvement, it should re-examine its op-ed and broader conflict of interest policies again.

By the way, I have no financial conflict of interest in this matter, since I have no income from or funding for this project.