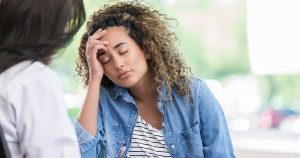 Lyme disease affects an estimated 300,000 people in the United States each year. Despite its increasing prevalence, there are many lingering myths about this tick-borne illness.

Also known as the “great imitator,” Lyme disease often affects more than one system in the body and can trigger a wide range of symptoms that may mimic other conditions. Lyme can lead to a variety of symptoms, including fatigue, mental “fog,” joint and muscle pain, severe headache, poor sleep, tingling extremities and mood changes. These symptoms may be confused with other diseases, including chronic fatigue syndrome, rheumatoid arthritis, multiple sclerosis, depression and even Alzheimer’s.

But the confusion doesn’t stop there. There are nearly 900 species of ticks around the world, yet many people may not realize that only two species of blacklegged ticks spread Lyme disease in the United States. And contrary to popular belief, chronic Lyme disease isn’t a recognized medical diagnosis, according to Danial Kaswan, MD, an infectious disease specialist affiliated with Aventura Hospital and Medical Center in Aventura, Florida.

We spoke to Dr. Kaswan about these and other misconceptions about Lyme disease. Here’s what he had to say.

How do people get Lyme disease?

Dr. Kaswan: Only blacklegged [deer] ticks transmit Borrelia burgdorferi – the bacteria that causes Lyme disease. It’s not spread by a mosquito. It’s not spread from person to person. You need a tick bite. And only blacklegged ticks found primarily in the northeast and mid-Atlantic states as well as northern California and the north-central United States [Minnesota, Wisconsin, and Michigan] are commonly infected with Borrelia burgdorferi. So, people living outside of these regions – known as endemic areas – have a relatively low risk for the infection.

Should people bitten by a blacklegged tick in an endemic area assume that they’ll get Lyme disease?

Dr. Kaswan: Not all ticks in high-risk areas are infected with Borrelia burgdorferi, and even those that are infected may not always transmit Lyme disease. Typically, a tick must be attached to your body for at least 36 hours for that to happen. They usually need to be engorged [full of blood] before they expel the bacteria into a person’s bloodstream through their saliva. Spotting ticks and removing them quickly is one of the best ways to prevent Lyme disease.

Does everyone with Lyme disease develop a “bull’s-eye” rash?

Dr. Kaswan: Most people with Lyme disease develop erythema migrans, which is the characteristic bull’s-eye rash, but not everyone. Some people have no skin manifestations. Others may not realize that they have a tick or that they were bitten by one. In some cases, the rash may be hidden, or it could also migrate. You could just have red patches that appear in one place, disappear, then re-appear at a different site. It’s not like you have a bull’s-eye rash and that’s it, or if you didn’t see it, you don’t have it. It’s not that straightforward.

It’s also not uncommon for people to try and self-diagnose Lyme disease. But what looks like a typical rash could just be an allergic reaction at the site of an insect bite. If someone presents with a rash that they’re convinced is the bull’s-eye associated with Lyme disease, they often develop other symptoms as well.

So, when diagnosing Lyme disease, what are some other possible early warning signs?

Dr. Kaswan: In many cases, Lyme disease causes constitutional symptoms, such as headache, neck stiffness, fatigue, chills, fever and loss of appetite. Some people may also have muscle and joint pain.

Stiffness and joint pain are also commonly associated with rheumatoid arthritis (RA). Could RA be confused with Lyme disease?

Dr. Kaswan: Early on, Lyme disease can cause joint discomfort or pain. If left untreated, Lyme arthritis can develop, which could mimic other inflammatory joint diseases. But Lyme symptoms are usually asymmetric [occurring on one side of the body], while RA is usually symmetric [occurring on both sides]. Rheumatoid arthritis may also cause morning stiffness, which may not be the case with Lyme. There are also specific biomarkers for rheumatoid arthritis that are used to diagnose this chronic inflammatory condition.

Other health issues with similar signs and symptoms can be ruled out by confirming whether someone really has Lyme disease. How is the infection diagnosed?

Dr. Kaswan: You can diagnose or rule out Lyme disease based on the epidemiology and the testing that you do. In addition to symptoms and the likelihood of exposure to infected blacklegged ticks, blood tests can detect antibodies to the bacteria that causes the infection. Other tests might be able to detect the bacteria’s genetic material, but they need to be performed in lab with expertise in these techniques.

What happens if Lyme disease is undetected and untreated?

Dr. Kaswan: Untreated Lyme disease can trigger a variety of symptoms, depending on how far it has progressed. Generally, Lyme disease can be divided into three stages. There’s early localized disease, which is usually limited to the skin. Some people may also develop a headache and experience other symptoms, like fatigue and body aches, early on. Then, there’s early disseminated disease, which can affect the nervous system, the joints and even the heart. Finally, there’s late stage disease, which is associated with intermittent or persistent arthritis involving one or a few large joints and possibly some neurological symptoms, like memory problems and nerve damage.

Dr. Kaswan: Chronic Lyme disease doesn’t exist. The infection can have early or late manifestations that are treatable. It is not uncommon for patients treated for Lyme disease with the recommended two to four-week course of antibiotics to have lingering symptoms of fatigue, pain, or joint and muscle aches at the time they finish treatment. This is considered post-Lyme syndrome and it’s likely the result of damage caused during the infection – not a persistent infection.

For a diagnosis of post-Lyme syndrome there must be evidence of a current or past infection with Borrelia burgdorferi. Many people with fibromyalgia, who have lingering non-inflammatory pain, muscle and joint aches and fatigue – but no evidence of this bacterial infection – may be incorrectly diagnosed with chronic Lyme.

Should someone who finds and removes a tick have it tested?

Dr. Kaswan: If the tick is engorged, which suggests it’s been there for longer than 36 hours, it’s summer and the person lives in a high-risk area, they should see a doctor. There are tests that can determine the species of tick, determine its level of engorgement and detect pathogens. Some ticks, including those that transmit Lyme, can also transmit other diseases. Always keep in mind that there might be other infections, which can also cause similar persistent symptoms that need to be treated as well.

Sign up for the latest in health and wellness, news and updates.